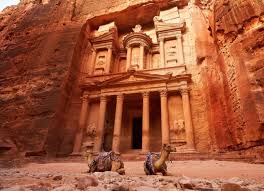 Jordanian Arabic is one of the South Levantine Arabic varieties spoken by people who live in Jordan. The Hashemite Kingdom of Jordan through history has been home many civilizations, which have influenced Jordanian Arabic over the centuries. Jordan is divided into twelve governorates (or states) categorized into three main regions; Northern, Central, and Southern.

Jordanian Arabic is the everyday spoken language used by the local population while MSA is used in written documents like books, newspapers, official documents, and education. You can find a mixture of both Jordanian Arabic and MSA being used for news channels. TV shows are typically in Jordanian Arabic but you can still find shows using MSA only.

Jordanian Dialect in the Central Region

The central region of Jordan includes Amman, Madaba, Zarqa, and Balqa. Amman is Jordan’s capital and the cultural, economic, and political center of the country of more than 4 million people. Jordanian Arabic in Amman is the urban form of south Levantine Arabic in Jordan. People in the central regions pronounce the letter ق as either أ or “g” but not ق. Other letters may also be altered or pronounced the same as the ث ,ذ, and ظ. Also, quite frequently people say the word بِدّي (bidi) which means “I would like.”

Jordanian Dialect in the North Region

The northern part of Jordan includes four main governates: Irbid (the second-largest governate in Jordan), Jerash, Ajloun, and Mafraq. People in the north pronounce the ق as “g” and the ك as “ch/ تْشَ”, while keeping the pronunciation of these letters ث,ذ, and ظ the same. Also instead of using the pronoun أنا which means “I am” people say أَنِي.

Jordanian Dialect in the Southern Region

The southern area of Jordan includes four governates: Karak, Tafilah, and Ma’an. The Jordanian dialect in the south is similar to the Bedouin dialect because the people are geographically close to the Bedouin area. People in the south say “وِدِّي” instead of “بِدِّي”. Additionally, when you want to ask “why” you say “لَوِيه”. While you say “لَوِيشْ” in the North and “لِيشْ” in the central regions.

The governate of Aquaba in the south is the farthest away from other governates. It has it is own dialect which is a mixture of the spoken dialect in Egypt, Gazza, and Al-Hijaz. Jordanian Arabic found in other areas did not influence the dialect in Aqaba because of the geographic isolation from the other parts of Jordan.

Nomads living in deserts east of Jordan and in Wadi Rum (southern Jordan) speak Bedouin Arabic. People consider it to be the closest to Modern Standard Arabic (Fusha). Bedouins say “وِدّي” instead of “بِدّي”.

For the present tense “مُضارِعْ” the “أ” does not change to “ب” as the case in of spoken Jordanian Arabic for the other areas in Jordan.  For example, the present verb “ألْعَبْ /I play” is pronounced with “أ” by Bedouins while it is pronounced with “ب” as “بَلْعَبْ” by other Jordanians. Also, in the north, central, and south regions the letter “ب” is added before the “ي” in the present tense while it is not the case with Bedouin Arabic. For example, the verb “يَكْتُبْ” he writes” will be “بْيُكْتُبْ” as spoken in the north, south and central regions, while it will be “يَكْتِبْ” by Bedawin people.

How to Learn Jordanian Arabic

View Jordanian Arabic resources to help you get started.

Here are some tips and guidelines to help you learn Jordanian Arabic. :